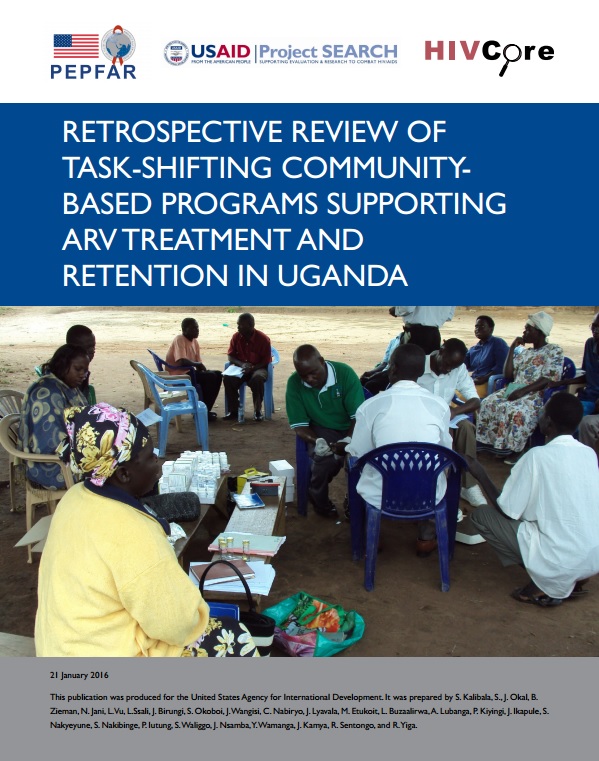 Shortages of human resources for health services have hindered the roll-out of antiretroviral treatment (ART) across sub-Saharan Africa. Initial ART roll-out models were physician- and hospital-intensive, necessitating task-shifting to quickly expand the capacity of the health workforce to address the burden of ART care services. The World Health Organization (WHO) defines task-shifting as a process of delegation whereby tasks are moved where appropriate to less specialized health workers. Uganda is one of  the countries that has adopted task-shifting for ART care. A review of the policy environment for task shifting was conducted in Uganda in 2009 and it showed high-level support in the Ministry of Health for task-shifting, and a recommendation was made to develop national-level policies and guidelines on task-shifting.

However, in developing such guidelines, it would be beneficial to define which tasks can be safely shifted and to which cadre of staff as well as the pre-requisite training needed by these cadres to carry out these tasks. Uganda has a good number of ART task-shifting programs, which should be documented and disseminated widely to guide the policy development process. The purpose of our study, therefore, was to examine examples of task-shifting programs in Uganda with the aim of generating data that could inform the development of task-shifting policies, guidelines, and practices.

Introduction: In response to the increasing burden of HIV, the Ugandan government has employed different service delivery models since 2004 that aim to reduce costs and remove barriers to accessing HIV care. These models include community‐based approaches to delivering antiretroviral therapy (ART) and delegating tasks to lower‐level health workers. This study aimed to provide data on annual ART cost per client among three different service delivery models in Uganda.

Methods: Costing data for the entire year 2012 were retrospectively collected as part of a larger task‐shifting study conducted in three organizations in Uganda: Kitovu Mobile (KM), the AIDS Support Organization (TASO) and Uganda Cares (UC). A standard cost data capture tool was developed and used to retrospectively collect cost information regarding antiretroviral (ARV) drugs and non‐ARV drugs, ART‐related lab tests, personnel and administrative costs. A random sample of four TASO centres (out of 11), four UC clinics (out of 29) and all KM outreach units were selected for the study.

Results: Cost varied across sites within each organization as well as across the three organizations. In addition, the number of annual ART visits was more frequent in rural areas and through KM (the community distribution model), which played a major part in the overall annual ART cost. The annual cost per client (in USD) was $404 for KM, $332 for TASO and $257 for UC. These estimates were lower than previous analyses in Uganda or the region compared to data from 2001 to 2009, but comparable with recent estimates using data from 2010 to 2013. ARVs accounted for the majority of the total cost, followed by personnel and operational costs.

Conclusions: The study provides updated data on annual cost per ART visit for three service delivery models in Uganda. These data will be vital for in‐country budgetary efforts to ensure that universal access to ART, as called for in the 2015 World Health Organization (WHO) guidelines, is achievable. The lower annual ART cost found in this study indicates that we may be able to treat all people with HIV as laid out in the 2015 WHO guidelines. The variation of costs across sites and the three models indicates the potential for efficiency gains. Check this article on 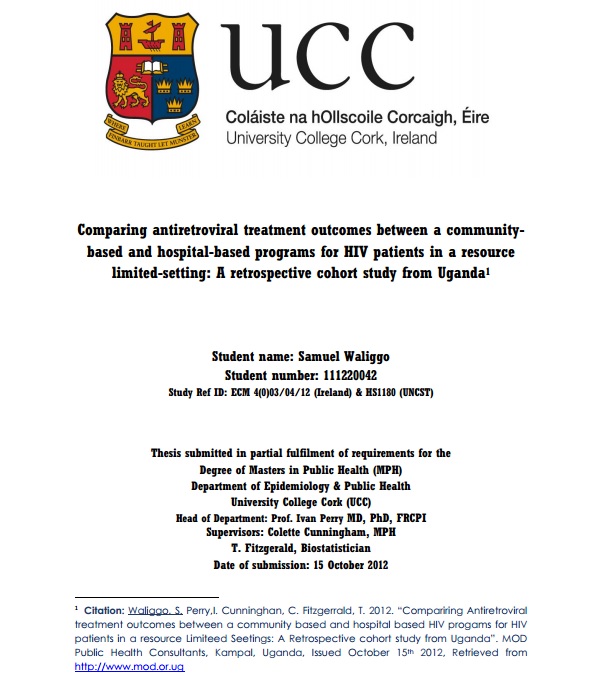 Background: Globally 34million people are living with HIV. Of these, 95% live in developing countries. Sub Saharan Africa (SSA) remains the most devastated. Currently 5million of the estimated 9.5milion people needing antiretroviral therapy (ART) are without access. Despite this global shortfall, setting strategies for universal access to ART is a goal for many Governments´ National HIV Strategic Plans. This goal must be balanced with the ability of these programs to monitor patients’ treatment outcomes. However, even in reputable community-based care programs (CBCP), like the Kitovu Mobile AIDS Organization in Uganda, it is not well researched whether CBCPs confers benefits on survival and retention that are better or similar to those reported in Government hospitals. This study aimed to; investigate whether CBHIV care influences antiretroviral treatment outcomes compared to hospital-based care (HC), assess possible risk factors related to mortality among patients who received ART in both programs.
Methods: A retrospective cohort study design was used to compare the overall treatment outcomes of 293(86M,207F) PLHIV started on ART in Kitovu Mobile with 293(56M,237F) PLHIV in Masaka hospital ART clinic-Masaka district, Uganda between 2007-2011, identified using proportionate stratified random sampling. Cox Proportional Hazard Model (CPHM) was used to assess possible risk factors associated with mortality on ART in both programs.
Results: Treatment outcomes in all categories, except patients transferred out, were significantly better among patients who received CBC compared to HC(p< 0.001); Alive and continuing on ART were 85.0% and 72.7%(p< 0.001);death 8.9% and 15.4% (p=0.02); lost to follow up 2.7% and 9.2% respectively (p=0.001). Mortality incidence rate was 3.83 per 100 person years in the CBCP compared to 7.19 per 100 person years in the HC. Incidence rate ratio was 0.53(95%CI,0.32- 0.88, p=0.01). Probability of survival was also higher among patients in the CBCP (Log rank test=0.01). In the Multivariate CPHM, risk factors related to mortality of patients were; type of facility (HC) (HR=1.89;95%CI,1.11-3.22,p=0.02),tuberculosis co-infection (HR=2.92;95%CI,1.69- 5.04,p< 0.001), Baseline WHO clinical stage 3&4 (HR=2.62; 95%CI,1.25-5.47,p=0.01) and adherence<95%(HR=2.97;95%CI,1.85-4.79, p< 0.001).
Conclusions: Community Based Care Program is associated with better treatment outcomes, survival and lower patients’ attrition. Therefore, strengthening CBC and collaboration within the existing health care system could impact on positive patients’ treatment outcomes in resource limited countries such as Uganda.